What To Do If You Are Suspected Of Committing A Crime

We Protect Commercial Truck Drivers From Violations That Threaten Their Livelihood

There are serious repercussions for anyone who is convicted of DUI, but if you have a commercial driver’s license, the consequences can be extra harsh, even if you were not operating a commercial vehicle at the time of your arrest. You need to do everything you can to keep your record clean, to keep your license and your job.

At Rien, Adams & Cox, LLP, we protect the rights of commercial drivers accused of a DUI.

Regardless of whether you were driving a commercial vehicle at the time of your drunk driving arrest, a DUI conviction will affect both your regular operator’s license as well as your commercial driver’s license. A suspended commercial driver’s license can obviously affect your employment, or your ability to find employment. The DUI defense attorneys at Rien, Adams & Cox, LLP, will vigorously defend your case, keeping in mind the serious potential consequences to your ability and right to operate a commercial vehicle.

Many CDL license holders arrested for drunk driving in California come from out of state. If your license is threatened, as the result of a DUI in California, your commercial driver’s license is threatened everywhere. Luckily, you do not necessarily have to come back to California to protect your rights. In many cases, you can hire a local DUI defense lawyer who can appear at all criminal and administrative hearings on your behalf. At Rien, Adams & Cox, LLP, the firm represents individuals from out of state charged with California crimes.

Simple equipment violations, such as weight restriction violations, can result in fines as high as $20,000. When you make your living on the road, you cannot afford such a ticket, and many such violations are chargeable not just to the owner of the vehicle, but to the operator. In addition to fines, these violations can result in a driver’s license suspension. The defense attorneys at Rien, Adams & Cox, LLP, can help you fight these commercial violations.

We Defend Commercial Drivers Against DUI & Other Traffic Offenses

Rien, Adams & Cox, LLP, has the resources to help commercial drivers from around the country facing traffic offenses, including DUI charges in the courts of Livermore, Pleasanton, the Central Valley and throughout Northern California.

Your call will never be answered by an answering machine or voicemail. A live operator is available to take calls 24 hours a day, 7 days a week. Contact the firm today for a free initial consultation. 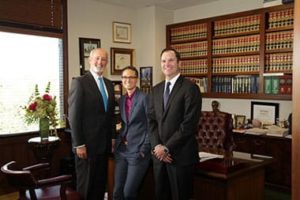